There are 5 easy and important ways how to increase the speed of your ad placement. 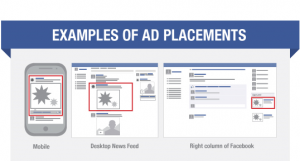 Utilization of different kinds of pass-backs is a quite common activity for many ads optimizers. But unfortunately, that usage has become a reason for something called “latency” and that in its places makes it hard for the people to view the ads. In order not to let something like this happen, you have to make sure that you do a checkup of your pass backs on a regular basis. By doing so you will be able to understand what kind of ad servers contribute to Latency. It would be even better if you changed to header bidding technique.

Another way to boost the speed of your ad placement is CONFIGURING LAZY LOADING.

Lazy loading is something that lets your ad placement appear on some parts of the website where the user is at one specific moment. All your advertisements will be loaded one at a time when you go down the site. That means that a footer advertisement will only be seen when you reach the end of that specific part of the website. Lazy loading is also known as Smart Loading. That smart loading is centered on the fact that ad viewability is at its top activity.

The third way to improve the speed of the ad placement is IN-LINE CSS.

All of the most successful practices of HTML are saying that creating an external CSS will be the best to create a wonderful content to code ration. But there is one thing. If you want to speed up the ad placement it would be better if you created a <div> in order to house the advertisements. You may split the Cascade Style Sheet by actually having a separate in-line CSS for ATF (above the fold) ad placement. After that hardcore your advertisement for it to start loading quicker.

Another was to make the speed of your ad placement quicker is COMPRESSING THE PICTURE SIZE.

You should make them smaller. By doing that, you will be able to optimize them for the best and the quickest speed. For instance in all kinds of mobile websites it is better to keep all the elements smaller than one thousand to optimize the customer activity. There are different kinds of choices in all kinds of plug-ins and different applications that will actually let you make your picture size smaller.

The fifth way to boost the ad placement speed is RESPONSIVE DESIGN.

In fact Google created Accelerated Mobile Pages that in fact give a quicker and more enjoyable experience for mobile-search users. A quick mobile website says that the ad placement and the loading of all ads is happening really quickly. AMP makes it faster for ads to be displayed than just an ordinary mobile website, though there are some pass-backs.

If you follow all these tricks on how to increase the seed of your ad placement, your life will become much easier and you will be able to make more money than you have been making before learning these valuable tricks.

By DFP Expert Uncategorized Comments Off on Ad Placement | How To Increase The Speed Of Your Ad Placement Read more... 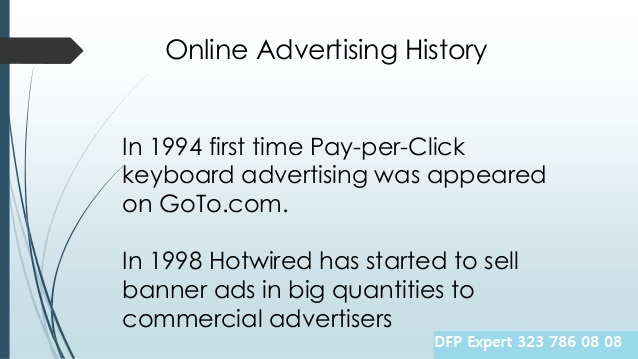 A Brief History Of Online Advertising: We do love internet, we cannot imagine our lives without it nowadays. And internet for us common users consists of websites, where we can read news play games, watch videos, check email and do other innumerable things.

Have you ever clicked you mouse right here? You will!

Once in the beginning of 1990-ies people understood that this wonderful tool is not temporary and is going to live and grow, naturally some bright minds thought of advertising on it. And it did happen in 1994. It is a solemn date for banner ads since on October 27, 1994 the world’s first ever banner ad appeared on HotWired, the first commercial magazine. Actually it was the day the magazine itself started, so it just opened with the banner on it already. 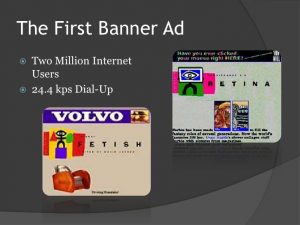 The ad read “Have you ever clicked you mouse right here? You will”. 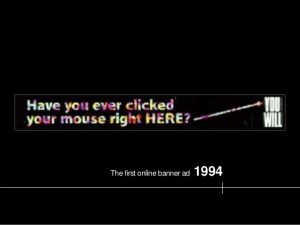 The fonts were of multi colors and it had 44 percent clickthrough rate, an unbelievable number for today. The banner was order by AT&T who paid 30 thousand dollars for it to appear on HotWired for three months. In 1995 an agency called WebConnect started to offer targeted ad placement using some information about the users. It also used CustomView tool, which monitored how many times the same user saw the ad and changed it to another one to prevent the so called banner fatigue. 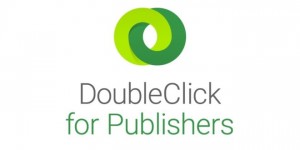 In 1996 a company called DoubleClick offered its clients a new service DART – Dynamic Advertising Reporting and Targeting. This tool enabled advertisers to see how their ads were performing, how many times they were seen and clicked and that eventually improved ROI. A new costing impression appeared – Cost Per Impression (CPI).

In 1997 Ethan Zuckerman created a method to enable pop ups appeared on websites. Initial high hopes turned to negative ones, since the users were outraged with what seemed to be infringement on their privacy. From 2000 nearly all known browser came out with some sort of pop-up blocker.

In 2006 with the appearance of social media, a revolution in targeted ads was already a fact. Such websites as Facebook accumulated huge date on its users and thus pioneered a new era of non aggressive but hyper targeted ads.

By DFP Expert Uncategorized Comments Off on A Brief History Of Online Advertising Read more...

What do you usually do when you see a banner ad? Do you click on it, or curse its inventor? But first we should ask how it is that we recognize it is a banner ad, and not something else. It is because this marketing tool appeared long ago, in autumn 1994, so enough time has passed to engrave its name forever in users’ minds.

Banner ads are everywhere in the web…

Banner ads are everywhere in the web. They can be of any size, form, intention and behavior. They can be irritating, funny, annoying and efficient: all depends on how you view them. One thing is certain that they are a part of multi million marketing games all around the world and they help generate income.

Because of great competition banner ads nowadays must be very creative and interesting. The tendency currently is to make interactive banners where the users can also participate in some process and thus get engaged and, why not, follow the link the banner contains.

So by nature banners have two functions: 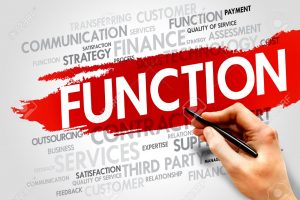 And banners do want to be clicked. That’s why it was very customary for some banners in old times to contain a message like Click me, or you can’t click me which thus psychologically affected the users to click on the banner, something they otherwise hardly would do.

So the idea is that in order to be effective, banner creators must have some knowledge of psychology, and they do have usually. Nowadays they are many online banner creation websites and downloadable software through which making an ad banner became a matter of minutes. No special knowledge of graphics is needed as everything is made automatically.