Native Ads are types of online advertisements that look like a standard website in their form i.e. they merge with its content and design in a way that makes consumers interested and attracted to them on the other hand they are to be paid for and as a distinctive feature they are usually made or created by advertisers and not by publishers. 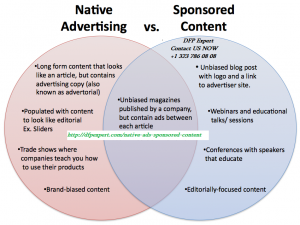 There are also some differences:
• As can be concluded from the name, native advertising contains some promotional elements; hence advertising itself has to convince somebody to do something rather than to provide some information. Though at first sight it may look like an ordinary article, but it can subconsciously drive to an action or contain some promotional data about a company or a business. Native advertisements are a kind of newspaper advertorials for the digital age.
So, native ads strive to convince, while sponsored ads is focused on informing rather than convincing or promoting a brand.

Native advertisement examples include:
 Some articles or any texts containing elements of promotion,
 Content or article linking directly out to the advertiser’s website
 Any videos, slides or images biased towards a brand

Though they say that Native Ads have a tricky side which is making customers confused when merging with the style and appearance of a website, their popularity is growing day by day bringing more benefits to brands and making more and more consumers interested and engaged. Besides when talking about quality Native Ads it is quite possible for customers to see the subtle line that makes the editorial different from a Native Ad. Don’t hesitate to pay a little more and get quality advertisements at the same time gaining more revenue. Native Ads pay back!

2016 Internet Marketing Tips That Will Shape The Internet

The internet marketing business is complex with its beauty, but it’s exciting for those who are curious to keep... read more

What do you usually do when you see a banner ad? Do you click on it, or curse its... read more

What is Ad Inventory

Ad inventory has significant importance if a publisher wants to monetize his/her website online. So the question is, what... read more

It is obvious that DFP Google is a complex program and all publishers using it have to face a number... read more